About the Disease: This is a fungal disease that occurs in moderate temperatures in the leaves of plants like corn. It is characterized by the presence of lesions, all over the leaf. Some lesions can be very broad, while some are narrow. Some lesions can be linear while others are oval shaped. In some cases, the lesions formed can also be in the form of a continuous chain of spots. The type of lesion that is formed will depend on many factors. For instance, the genotype plays an important role.

Symptoms: Most of the symptoms that occur in the Northern leaf spot disease are similar to the symptoms observed in the Southern leaf blight. When you observe the leaves of the plant affected by the disease, you can easily spot the round lesions. Sometimes the lesions can also be oval in shape. The size of these lesions will be around one inch or even more than that. They have concentric rings throughout the leaves. Usually some small spots will enlarge and fuse together in the condition of blight.

Pathogen Involved: The disease is mainly caused by the fungus, Cochliobolus carbonum, which is otherwise, called the Helminthosporium carbonum

Time of Occurrence: The disease mainly occurs in conditions of high humidity.

Disease Management: Managing the disease will depend on the cause. Thus initially the causative agent has to be clearly identified, before proceeding on tot eh treatment. In this case, the causative agent is the fungus. Thus fungicide must be regularly applied. The resistant hybrids can also be grown. But when you are finding for resistance, you must also check if the plant is resistant to fungicide as well. In such cases, it need not be cultivated.

The infected regions have to be properly plowed. In some cases, improper tillage or plowing can be one of the major reasons for the occurrence or the wide spread of the disease in a field. To avoid this, proper tilling needs to be done in a regular manner. The fungicides that mainly act on the leaves of plants called the foliar fungicide must be sprayed evenly and in right concentration in the fields. The seed production field is the major area that gets affected. Thus this region is focused during the disease management process. When the breeds are selected for growing, it needs to be checked for the susceptibility for the disease. Those which are resistant to the fungus can be selected and then grown in the field. 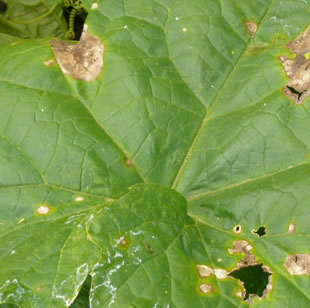